“Coldblooded savagery!”
“She compromised our courtship!”
“Bloodstained bedroom!”
“She undressed with the green – eyed bandit!”
“Gossip!”

From slumber it takes force to AROUSE
This man with liquid tastes; it seems OBSCENE
To push him so hard; I have to be mean
Or there is no consequence. To carouse
Without penalty is wrong. You’ve JADED
Too soon; a shadow of self. Not SECURE
In your place. And we who support, endure
The agony of a love that faded
Fast. Love spilt drop by drop. Be FRUGAL
With how you waste our care. There are VARIED
Ways to break the bonds that bind. Unmarried
Soon if this persists – just like thin gruel
Lacking body. But cast that gaze so FLAWED
I melt; wordless I know I am adored.

Chaucer could have “swaggered” when John of Gaunt offered him a “generous” relationship with Katherine Swynford’s sister, Phillipa de Roet. Perhaps Chaucer thought it “laughable” that he, the poet-son of a merchant-man, might end up with the Queen’s lady for a bride. Truly it caused some “excitement” for the bard who “gossiped” in his poetry about “blushing” royal “courtships.” And here he had one of his own. Yet this thinking is “flawed.” Shakespeare had yet to invent “words.” Chaucer merely deigned to write in English, Old as it was. 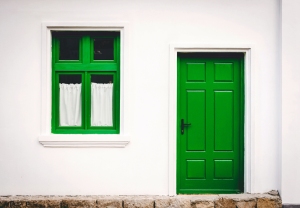 Green was never a color she enjoyed. She preferred the darker colors such as deep reds, dark oranges, and purples. Most shades of green–lime green, spring green, mint green–were too bright for her liking and the darker shades–moss green, forest green, olive green–reminded her of vomit.

Yet, on her would-be first Mother’s Day her husband handed her a small box. She opened it, knowing she didn’t deserve a gift. Inside the black velvet box was a sterling silver heart-shaped necklace with an Emerald jewel in the middle. Emerald would have been the birthstone of their first born child.

She looked up at her husband and smiled. “I’ll cherish this always.” Now she had a brand new perspective on the color green.

While rearranging the few diamond rings on sale a rundown shop, with leaky ceiling, Leopold was humming a tune from his youth. He smiled at the thought of his big projects he had 43 years ago, back then he wanted to be in a fancy street, selling engagement rings with colourful precious stones.

Today almost half a century later, his dreams had only partially come true. His shop was small and hidden, no one was interested in coloured stones, and the few diamonds he sold were lacking fire, they did not interest him. Leopold had kept his store through many years of deception due to his love for emeralds and for his wife.

He always tried to convince the young men, searching for the ring, to opt for an aquamarine, a ruby, a zircon, or above all an emerald, to find the right stone for their soulmate.

In his collection, Leopold had a wide variety of emeralds, in different shades of green, in different cuts and sizes, he had something for every wallet, still it was rare that someone opted for an emerald. Leopold’s pride was a very large stone, of a purity rare for its size. He showed only to his most trusted clients, as it had been a gift to his wife, who had died too young, at their wedding 43 years ago. He had given it to her because it suited her red hair and emerald green eyes more than well.

Mara’s horse lunged as soon as the scratchy speakers began blaring the National Anthem. She gave Shamrock his head and he galloped around the perimeter of the arena with the American flag snapping above rider and horse. Beneath the stars and stripes Mara wore a western-cut shirt of the emerald green, a tribute to her ancestors. Mara was named for her great-grandmother who came to Butte, Montana from County Clare, Ireland to scrub shirts for copper miners. Green was the color of Shamrocks’s bridle, saddle blanket and glitter-painted hooves. The rodeo fans stood in bleachers, hands over hearts and cowboys took off their hats. Mara rode the flag and green on display until the song ended and the rodeo began. From destitute Irish immigrants, her family now operated the largest short-horn cattle ranch in northern Idaho. They were as proud of the green as they were the red, white and blue.

Ella zipped up her new dress, a rich emerald hue, satin jersey. She looked at her svelte reflection in the full-length mirror and smiled. She’d long dreamed of possessing such a dress; it made her feel pretty and worthy. The green emphasized the brownness of her almond-shaped eyes.

She thought about her mother and wondered where she could be. She wished she didn’t care about such things. She was happy to finally be free.

Ella knew the dress was a mask. When she’d take it off, she’d be back to her regular self – lacking confidence, feeling unworthy and unloved.

4 thoughts on “May Writing Prompt Round Up: Inspired by Shakespeare and Emerald”